Preventing Failure at the

Mysterious and Unexpected Failure. Jason and Suzanne numbly reviewed the financials for the umpteenth time as they awaited the verdict from their meeting with the investors. There could be little doubt about the outcome. The CEO and the CFO both still felt dumbfounded. They could not grasp how quickly their company’s prospects had gone from being so promising to hopeless. They struggled to understand what had gone so terribly wrong.

There is a mysterious phenomenon that plagues organizations of every size and stripe. It affects new company start-ups, merger and acquisition integrations, joint venture endeavors, supply chain collaborations, major strategic initiatives, and large scale change management projects. It strikes out of the blue just when prospects are improving or looking really good. And just as puzzlingly, it strikes organizations that appear to be collaborating well.

After years helping organizations escape its clutches, I pinpoint the cause in my Power through Collaboration books, and label the phenomenon “Failure at the Brink of Success Syndrome.”

Promising Beginning. In this syndrome key players often expressly agree to operate via a collaborative culture. They profess a willingness to collaborate, sacrifice, and work hard to make their business, venture, or project successful. However, just as the business builds momentum, the key players turn on each other. They become entangled in vicious battles over power, control, and money. The ensuing warfare can destroy the company, endeavor, or project, and devastate the careers and finances of all involved.

For example, Jason and Suzanne launched their company with much enthusiasm, a sense of great promise, and adequate capital funding. The executive team was knowledgeable, competent, and had proven themselves during their careers. They had successful executive track records at major companies and degrees from prestigious universities.

The key players discussed troubling and counterproductive management practices they had experienced firsthand at prior companies. They discussed problems caused by management operating via domination and onerous control. They emphasized that they could and would do much better. They espoused operating their company utilizing a collaborative approach.

At the start of their company the key players seemed to work well together. With an eye on large returns down the road, they sacrificed for little immediate reward. As is usual for new ventures, the early period had setbacks, delays, and disappointments. Yet, the capable cast of key players began to make things happen. Customer relationships were built and sales gained traction.

Their hard work soon began to pay off. Several lucrative contracts were landed. The order quantities were a game-changer with the potential to rapidly push the company to the next level. A celebration party was held. Champaign flowed and inspired congratulatory toasts all around. 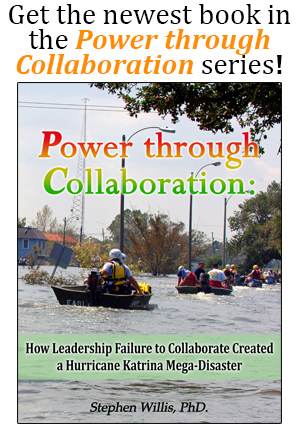 Power through Collaboration: The Formula for Success in Challenging Situations

Power through Collaboration: When to Collaborate, Negotiate, or Dominate